History of the Dogma of the Immaculate Conception

On 8 December 1854, after having consulted the bishops of the world, Pope Pius IX, with the Apostolic Constitution ‘Ineffabilis Deus’, solemnly proclaimed the dogma of the Immaculate Conception, which affirms,

“We declare, pronounce and define that the doctrine, which holds that the Blessed Virgin Mary, in the first instance of her conception, by a singular grace and privilege granted by Almighty God, in view of the merits of Jesus Christ, the Savior of the human race, was preserved free from all stain of original sin, is a doctrine revealed by God and therefore to be believed firmly and constantly by all the faithful.”

On 25 March 1858 the Virgin Mary appeared to the young peasant girl, Bernadette Soubirous in Lourdes and announced, “I am the Immaculate Conception.” Mary first appeared to Bernadette on 11 February of that year. 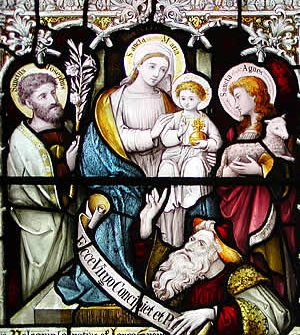 Mary of the Immaculate Conception – a photograph of the stained glass window located in St Mary’s Cathedral, Newcastle upon Tyne.

St Cuthbert was born about 634 and legend tells us that as a boy he used to tend sheep on the mountain-sides near the monastery of Melrose.

In the year 651, while watching his sheep, he saw a vision of the soul of St Aidan being carried to heaven by angels, and inspired by this he became a monk.

Eventually he became prior at Lindisfarne (Holy Island) where he spent much time in evangelizing the local people.

He wanted more solitude and time for contemplation so went for a short while first to either St Cuthbert’s Isle (off Holy Island) or, as some biographers suggest, St Cuthbert’s Cave in Northumberland.

Eventually in 676 he moved to the Inner Farne, where he lived in solitude and peace for a while.

While St Cuthbert was on St Cuthbert’s Isle he would pray for long times at night on the shores of the sea in all weathers and seasons.

Legend has it that the sea otters would come and sit at his feet warming them in the freezing North Eastern weather. Legend also has it that he, like St Francis, conversed with the local ducks who would flock around him.

He also made rosaries from the fossil crinoids washed up on the sea shore. To this day these crinoids (still washed up locally) are known as St Cuthbert’s Beads.

He is recognised as one of the world’s earliest wildlife conservationists and the Eider Duck is known locally as the Cuddy Duck or Cuthbert Duck in his memory.

Eventually, he left Holy Island and the Inner Farne when he was called back to active service as Bishop of Hexham in 684. For two years he travelled the length and breadth of the North of England.

He had the reputation of being a saint and a worker of miracles even in his lifetime. He returned to Inner Farne and died there on 20 March 687.

St Cuthbert was buried in his monastery at Lindisfarne, and his tomb immediately became celebrated for remarkable miracles. After his death, the Lindisfarne Gospels were written in his honour.

Cuthbert had asked that if ever the day came when the monks were driven from the monastery, would they take his bones with them. Years later there was a threat of invasion by the Danes. The monks fled, taking their precious burden with them. For over two hundred years they wandered about the north of England. Finally, they settled at Durham and began the building of the famous Durham Cathedral which was to house the Shrine of our Saint

St Cuthbert’s feast is kept on the 20th of March. 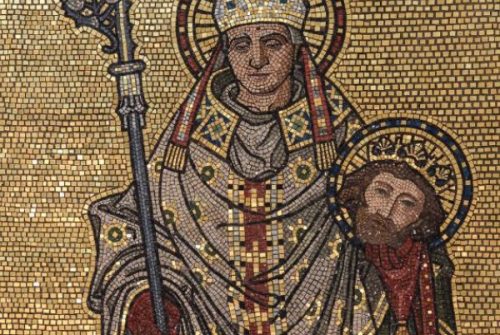