Sharing our faith and spreading the Good News of Jesus Christ is at the very heart of our mission as Church. In this section of the website, you will find tools and resources to help you gain confidence in knowing when and how you can share your faith with others.

The term ‘Evangelisation’ is a Greek verb that means ‘to bring the good news to others’ for further details on what we mean by Good News see the section below.

The Good News is the news we need to hear every day of our lives.

There are many words used in Church circles that we might not be familiar with. A key one is ‘Kerygma’ which is a Greek word for ‘proclamation’. The Kerygma is the key teaching that we are to proclaim to others.  It consists of the following Good News: 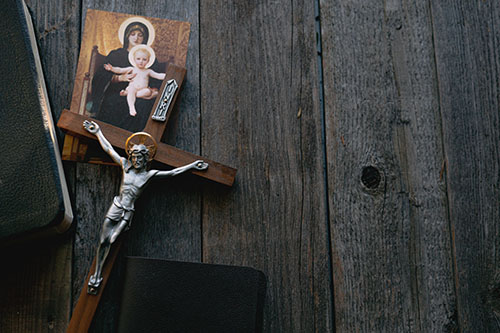 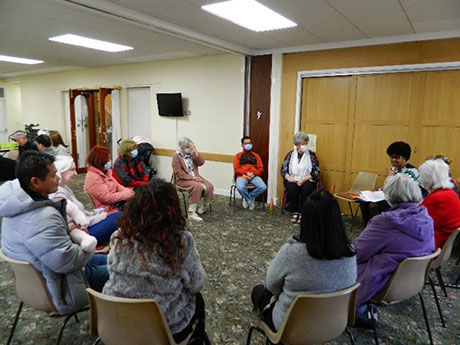 Witnessing to your faith toolkit

Providing confidence to Catholics to be witnesses of the Good News.

The Church community gathers together to profess their faith through the Creed. This is a summary of what Catholics believe.

For many people faith is very personal. The links below aim to provide resources to help people move from the more formal profession of Faith in church to a more informal sharing in a more conversational style.

They also serve as a reminder that we are always witnessing through our actions at home, in our neighbourhoods, in our workplaces and with our friends. 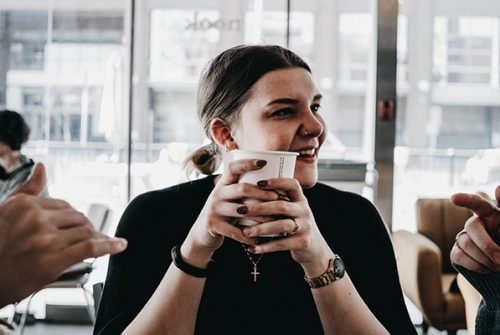 Landings is a series of relaxed, informal, lay-led meetings, based on faith-sharing within a small group, that offer a safe and supported “landing place” for Catholics who have been away from the Church and are thinking about coming back.

Landings offers Catholics wanting to reconnect a supportive community within which they can ask questions, discuss issues, deal with difficulties; an opportunity to be with other, ordinary Catholics who are trying to live their faith; and a safe environment in which to come to terms with recent changes within the Church and themselves.

Landings offers already active Catholics an opportunity to share their faith; to participate in the Church’s mission to welcome those who have been away; and a chance to grow and learn from each others’ spiritual journeys.

Landings offers Catholic parishes and communities a simple process for reaching out and supporting Catholics who have been away from the Church or who struggle in their relationship with God and the Church. Landings is usually parish-based and led by lay people within the parish community.

Conversations with Christians are one of the most important influences in bringing people to faith.

The Talking Jesus course will inspire you to share your faith and will give you practical suggestions to help you to be natural and relevant as you talk about Jesus with the people you meet.

There are six encouraging, video-based sessions with short films, inspirational, short testimonies, real-life examples from people who are talking Jesus, and a short, easy-to-follow course book.

The Kerygma Project is a way of helping Catholics live out their God-given call to take part in the evangelistic mission of the Church.

It aspires to form, train, empower and build up evangelised and evangelising communities and individuals.

The Project is being developed by Andrew Brookes OP. Various activities are currently available.

What shall we do with the Good News?

What do you think are the best practical ways to share the Gospel with people outside our churches? We do this both through words and actions with the ultimate aim of bringing people into the Church. However, in the first instance, we may just be trying to connect with people and let them know they can trust us. On the other hand, we may also be trying to encourage spiritual curiosity and openness.

If you are a practicing Catholic who is interested in evangelisation you may wish to join this conversation. The aim is to identify the best approaches to evangelisation for subsequent promotion in the diocese. To excite people about the possibilities for evangelisation and to generate new insights.

What are the best practical things parishes and individuals can do to interest people in Christianity?

Recent suggestions from these conversations have been: 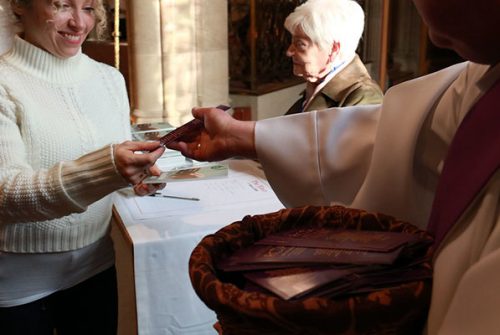 Nightfever is an international youth led movement to organise evenings of evangelisation.

At its simplest it is the opening of our churches for Adoration in candlelight, with Catholics going into the streets to invite people in to pray.

In our diocese these events have run under the title of ‘Reach out’. There are planning templates and experienced hands willing to share their experiences.

Many Catholics do not regularly attend Mass and are not part of a worshipping community. The Welcome Home Campaign aims to reach out to the members of the fold who are missing from our pews.

A welcome home campaign is a simple invitation for those that are lapsed to return. A parish would organise a specific Mass on a particular weekend as the welcome back celebration and would think practically about how to make people feel welcomed. In addition, they may produce invite postcards for people to give out or share among their friends as a conversation starter.

“Therefore, go and make disciples of all nations, baptising them in the name of the Father and of the Son and of the Holy Spirit, and teaching them to obey everything I have commanded you. “

“Today, one thing ends, and another begins. A new stage of this journey is beginning. A stage marked by communion between all the members of the charismatic family, in which the mighty presence of the Holy Spirit is manifested for the good of the entire Church. A presence that makes each one equal, since each has been born of the same Spirit: great and small, old and young, engaged on the worldwide or local levels, all form a whole that is always greater than the part.”

The term ‘CHARIS’ stands for ‘Catholic Charismatic Renewal International Service’. At the request of Pope Francis, the CHARIS statutes were erected on 8 December 2018 and the first International CHARIS General Assembly was held in Rome on the feast of Pentecost in 2019.

Up until this point, Catholic Charismatic Renewal (CCR) had been served by two bodies at international level – one serving covenanted communities and the other serving prayer groups and other organisations in CCR. Both bodies were recognised at Pontifical level as ‘private associations of the faithful’ (i.e. undertaken by the faithful on their own initiative).

Pope Francis desired to see CCR reach a new level of unity and commissioned work in order to bring about one single service rather than two service bodies. As a result, CHARIS was established as the new and only international service for the entire Catholic Charismatic Renewal, with a ‘public juridical personality’ (i.e. carried out on the initiative of the ecclesiastical authority of the Church).

CHARIS aims to serve and create communion between all the realities existing in Catholic Charismatic Renewal for the good of the entire Church and the proclamation of the Gospel in the world. In order to do this effectively, CHARIS invites each country to develop a CHARIS National Service of Communion (CNSC) and the CNSC invites each diocese to establish a CHARIS Diocesan Service of Communion (CDSC).

In the Diocese of Hexham & Newcastle, the CDSC is integrated within the Vicariate for Faith & Mission (VFM) which provides support and ensures sustainability. Both the CDSC and the VFM will work towards the following shared objectives based on 3 key priorities given to CHARIS by Pope Francis:

The CDSC is subject to the authority of the bishop and will operate in keeping with the guidance of the CHARIS National Service of Communion assuring coherence with the spirit of the CHARIS statutes. Bishop Robert Byrne has asked Fr. Shaun O’Neill to establish the CDSC in our Diocese.

There is a new emphasis on building ‘communion’ (koinonia) by seeking fellowship and unity among the various expressions of CCR while celebrating the diversity which each brings. There is also a recognition of the important role which young people have in the Church and a commitment to nurture their spiritual growth and develop their leadership. The CDSC will aim to hold a gathering open to everyone at least once a year.

Service, rather than governance, is at the heart of the CDSC’s role. All members, including those with leadership roles, have limited terms of office to ensure that the CDSC remains truly representative of CCR in the Diocese and relevant to changing needs as they arise.

This is the official website for Catholic Charismatic Renewal, England. 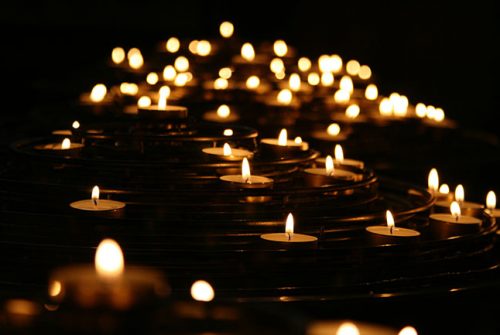 View our What's on Guide

In this short video, Andy Drozdziak shares his story of the struggles of growing up, his self-image and having low self-esteem.

In this part of the website find the most up to date information on initiatives that are happening in the next few months. This regularly includes ‘Home Mission Sunday’ which is celebrated every September and ‘Thy Kingdom Come’ which takes place every May/June.

Alongside these national events find out what local events are taking place.

It is totally possible to have conversations with people that give life and help them to come closer to Jesus. Mission Made Possible helps you to do just that.

Take a step of faith

Is the thought of sharing your faith just too scary? Do you wish you could help your family, friends and others to come to know Jesus, but you just don’t know where to start? Are you thinking; ‘that’s not for me, I could never do that’? Well, you are not alone.  You are invited to become missionary and deepen your journey of discipleship from home. The Diocese of Plymouth’s online course will help you to have conversations about faith. Conversations with friends, family or in daily life that don’t make anyone else feel awkward but could be life changing.  Find out more about Genesis Mission and how God is helping people to become missionary disciples. 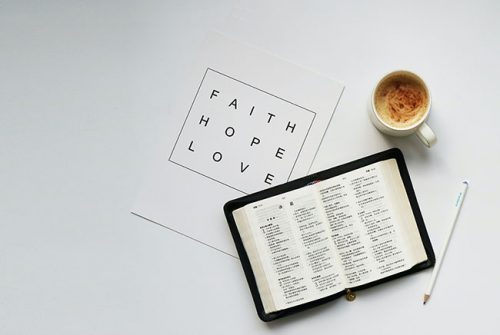 Sycamore - What Do You Believe? 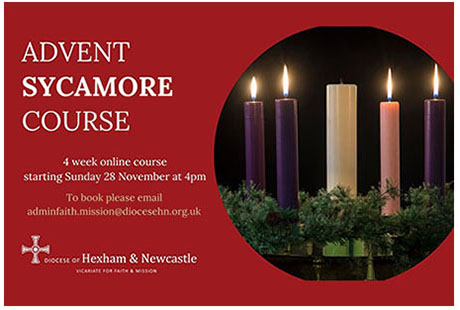 Sycamore is an informal course about the Christian faith and its relevance for life today. It gives you space to meet other people, share ideas, explore your beliefs, and think about questions that really matter. Each session involves a short film and time for discussion. Everyone is welcome. 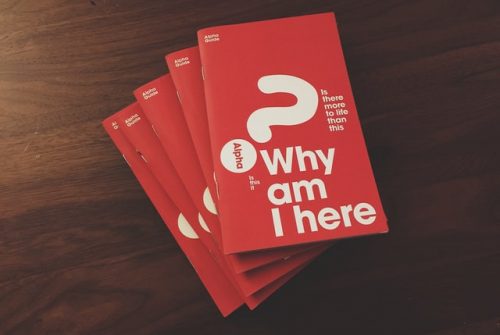 Alpha is an 11-week course that creates a space, online or in person, where people are excited to bring their friends for a conversation about faith, life and God.

View course
We use cookies on our website to give you the most relevant experience by remembering your preferences and repeat visits. By clicking “Accept All”, you consent to the use of ALL the cookies. However, you may visit "Cookie Settings" to provide a controlled consent.
Cookie SettingsAccept All
Manage consent