HomeNewsEducationJohn Paul II Awards: ‘Finding that thing that sets your soul on fire’

John Paul II Awards: ‘Finding that thing that sets your soul on fire’ 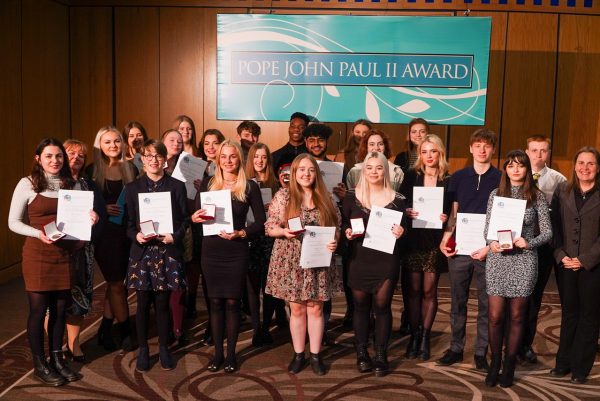 71 young people from our diocesan schools and parishes gathered with their family, friends, teachers and award leaders at the Hilton Hotel Gateshead on 13th March to receive and to celebrate their Pope John Paul II Awards. During the difficult period of Covid restrictions in both school and parish, they had dug deep and found the creativity and commitment to witness to their faith and serve others, writes Mary Hughes.

In her keynote address, Mary Madziva, Retreat Development and Outreach Coordinator for YMT and Chair of the Catholic Student Network, affirmed the awardees for their inspiring involvement and suggested they were ‘half a step closer to finding that thing that sets your soul on fire’. Mary encouraged the young people to recognise that God had not called them to be Greta Thunberg, Martin Luther King or Mother Teresa. He had called them to be themselves ‘perfectly positioned in this place and time for a reason’.  She challenged them to become all that God has created them to be ‘in the midst of today’s world which so desperately needs protagonists and changemakers’. Or as Pope Francis said in ‘Christus Vivit’, ‘Dear young people, please, do not be bystanders in life! Get involved’.

Highlight of the afternoon was an interview with four of this year’s award winners. Joseph (St Joseph’s Catholic Academy, Hebburn), Theresa (Carmel College, Darlington), Grace (Cardinal Hume Catholic School, Gateshead) and Josita (St Anthony’s Girls’ Catholic Academy, Sunderland). The four moving stories of four individual journeys through the Award described many activities in the wider community ranging from volunteering in a local hospital to a park clean-up, from tree planting to creating a mural; parish involvement had opened eyes, made connections, kindled and developed faith and given new opportunities for prayer, as well as delivering newsletters to the elderly and even church cleaning!

Bishop Robert, who could not be present, sent an encouraging video message expressing his congratulations to the medal winners and thanking them for their participation and the event was enhanced by music from the choir of Cardinal Hume Catholic School.

In her Vote of Thanks, Deborah Fox, Director of Education, thanked everyone involved in coordinating and running the Award scheme.  She especially thanked and congratulated the 71 young people highlighting the importance of relationships and of young and older working together in our faith communities.

'Dear young people, please, do not be bystanders in life! Get involved’

Pope Francis: Christus Vivit
We use cookies on our website to give you the most relevant experience by remembering your preferences and repeat visits. By clicking “Accept All”, you consent to the use of ALL the cookies. However, you may visit "Cookie Settings" to provide a controlled consent.
Cookie SettingsAccept All
Manage consent