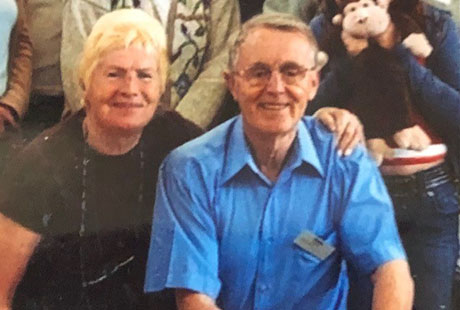 We are sad to report that John Marshall, who was for many years the chair of the Hexham and Newcastle Justice and Peace Co-ordinating Council died in the early hours of Saturday 4 December. John had been in poor health for several years, lovingly cared for by his wife Audrey. Over the last month he had become increasingly frail.

John was a beloved husband, father, grandfather and great grandfather but to many of us, along with his wife Audrey, he was the face of Justice and Peace in the Diocese.

Many of us know him as the inspiration behind the Justice and Peace Refugee Project which, along with Audrey, he helped set up in 2001 and which continues to support refugees and asylum seekers in the Tyneside area. John served as volunteer manager of the project until 2016, when due to ill health he had to retire.

John was a Labour councillor for many years and served a term as Lord Mayor of Newcastle. He won the respect of councillors from all parties for his integrity and commitment. He was very active in the accreditation of Newcastle as a Fairtrade city and never ceased to speak up and work for the needs of the people of Newcastle.

For his friends and colleagues, John has been an inspiration. For those who did not know him personally, we have all benefited from his work for Justice and Peace. We know people will want to pay tribute to him; perhaps the greatest tribute we can pay is to carry on his work, speaking out, serving and campaigning for the marginalised in our society. We know we will remember John, his beloved Audrey and the rest of the family in our prayers.

John’s requiem mass will be on Thursday 23 December at 11.45am at St Bede’s Church, Whickham View, Newcastle NE15 7HP.

This will be followed by cremation at the West Road Crematorium NE5 2JL. All are welcome afterwards for refreshments at Benwell Hill Cricket Club NE15 7EU (opposite the crematorium).

In light of people’s concerns about COVID and in response to the many people who have requested it, Audrey and the family have arranged a live stream the Requiem Mass. Click on this link to view the Mass.

Family flowers only, donations in lieu to DHN Justice and Peace Refugee Project. You can use the button opposite to do so. Thank you.

Click Here
We use cookies on our website to give you the most relevant experience by remembering your preferences and repeat visits. By clicking “Accept All”, you consent to the use of ALL the cookies. However, you may visit "Cookie Settings" to provide a controlled consent.
Cookie SettingsAccept All
Manage consent