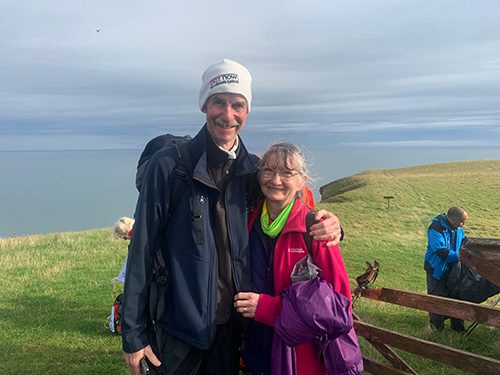 Chris and Clare Myers from North Shields joined a group of 30 European campaigners, known as The Climate Pilgrims as they journeyed towards Glasgow for the COP26 Conference.

The pilgrimage of 30 people left Zielona Gora in Poland on August 14 and walked across Germany and the Netherlands before catching the ferry from Amsterdam arriving in North Shields on the morning of 12 October.

The 30 Climate Pilgrims- an ecumenical group of churches and organisations walked to raise awareness of the international impact of climate change, left Zielona Gora in Poland on August 14 and walked across Germany and the Netherlands before catching the ferry from Amsterdam arriving in North Shields on the morning of 12 October.

Chris and Clare, members of the Justice and Peace Council and Diocesan Environmental Group, met the walkers off the ferry at North Shields, welcoming them to the North East and escorting them to the Scottish Border, some 95 miles north – walking 15 miles per day for eight hours, along the Northumberland coastal path until Tuesday 19 October.

The Pilgrimage had an ecumenical feel to it, with hospitality and support being offered by the Catholic, Anglican, Baptist, Methodist and URC communities. Whilst in the Diocese the group were welcomed by Fr Chris Hughes and the community at St Cuthbert’s in North Shields, where the walkers were delighted that the whole primary school turned out to greet them. Going further north the group were welcomed to St Wilfrid’s in Blyth where they were provided with a meal and accommodation for the night before setting off again the next morning.

From Berwick the group then continued up the coastal path into Scotland through Dunbar and Edinburgh and onto Glasgow on Oct 29.

As well as wishing to send a message to world leaders at COP26, the group were keen to make an impact at local level, engaging and encouraging local communities to make positive change, whilst keeping the care of God’s creation very much in mind.

A short video produced by SCIAF and can be found in the slideshow gallery below.

Further information on the Climate Pilgrims can be found here

"COP26 is a really important time for the world to come together and say, 'we're serious about tackling climate change'. The pilgrimage is part of delivering that message and I'm keen to support and stand in solidarity with people who are committed to being part of the change. If we don't reduce emissions over the next 10 years and provide the climate finance needed for developing countries, it will simply be too late.”

Chris Myers
We use cookies on our website to give you the most relevant experience by remembering your preferences and repeat visits. By clicking “Accept All”, you consent to the use of ALL the cookies. However, you may visit "Cookie Settings" to provide a controlled consent.
Cookie SettingsAccept All
Manage consent