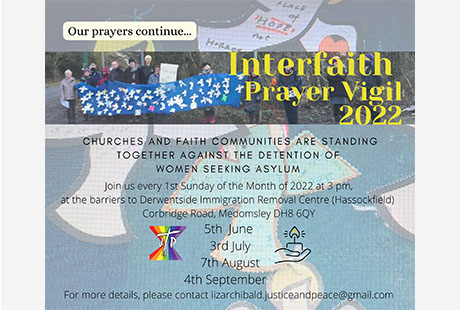 On Pentecost Sunday, taking place over the forthcoming Jubilee weekend, there will be an anniversary vigil to mark a year of prayer and practical action in opposition to Derwentside Immigration Removal Centre (IRC). All are welcome to attend on the day – 3.00pm, Sunday 5 June, at the IRC on Corbridge Road, Medomsley (DH8 6QY) itself – or show support and solidarity at home in silent prayer, or within their own congregations and churches. The interfaith vigils are organised by members of Hexham & Newcastle Roman Catholic Diocese ‘Justice and Peace’ network.

Derwentside Immigration Removal Centre (IRC) – nr. Consett, County Durham – began the detention of women at the end of last year. It is one of seven IRCs operated by The Home Office in the UK. Derwentside, previously known as Hassockfield and prior to that operated as Medomsley Youth Offenders Institution, is managed by Mitie, on behalf of Home Office. It replaces the more well known and controversial Yarl’s Wood Detention Centre as the main IRC for detained women in the UK and will hold around 80 women at the site. Some of the women at Derwentside IRC have been moved there from Yarl’s Wood.

The first vigil was on Pentecost Sunday, 2021. In keeping with Covid 19 restrictions and concerns at the time that event was broadcast from the Emmaus village, which is the base of Hexham and Newcastle’s youth service. There were also groups praying in person in various churches in the area. And from August 2021 the prayer vigils have taken place on the first Sunday of each month at 3.00pm at the barrier at the entrance of the detention centre itself.

Commenting on the occasion of the first anniversary, Liz Archibald (co-organiser) said:

“As Christians and others, we feel that detaining very vulnerable women in this way is not what we regard as in keeping with Christ’s teachings. As I realised what was happening at Derwentside, I began to think that I could not call myself a Christian unless I showed my opposition using the means that my faith has given me – through prayer and gathering with purpose together.

I would very much welcome others to join us either in person on the day or join us in spirit through the prayer resources and other information we can make available here: Prayer Vigil Events.”

Mary Hughes, who also organises and attends the vigils, added:

“During the Prayer Vigil, we spend 15 minutes in silence – which is very powerful when we do it together.  We might feel powerless to change this unjust situation, which goes so much against what we believe as Christians but, in that silence, we are always reminded that God’s love can reach the women on the other side of the barrier and bring them our compassion. The feeling of solidarity with the women inside the IRC – while bearing silent witness – is very strong and gives us an even greater resolve to support them. I would encourage other concerned Christians and those of other faiths to join us and, in this small but powerful action, to recognise our shared humanity.”

Fr Chris Hughes who is the chaplain to the Justice and Peace Co-Ordinating Council and has attend the vigil a number of times commented:

“I fully support the regular vigils that show solidarity and support to the detained women at Derwentside IRC and congratulate the organisers and past attendees on reaching this first anniversary, on Pentecost Sunday.

The concerned lay individuals involved – either through attendance or by silent prayer at home, supported by members of clergy – are bearing witness to what they see as an inhumane approach to dealing with those whose right to remain in his country is contested. They are using the power of prayer to show both solidarity with others and heralding God’s kingdom of true peace and justice. They are also expressing the profound communion we share with all of humanity and God – a hallmark of Pentecost Sunday.”

On the occasion of the anniversary prayer vigil happening on Pentecost Sunday, Bishop Robert Byrne said:

“This is a fitting day for an anniversary vigil, as in the church calendar, Pentecost Sunday commemorates the descent of the Holy Spirit to the Apostles and other disciples – following the crucifixion, resurrection of ascension of Jesus Christ to Heaven (Acts of the Apostles, 2). It marks the beginning of the Christian Churches mission to the world.

These regular vigils and those involved are an example of the kind of ‘faith in action’ which Catholic Caritas is well known for – whether in response to the war in Ukraine, or the current ‘cost of living crisis’. Both are connected in their own way of course and show that issues which may seem distant from us can be closer than we think or would wish to admit.”

View Event
We use cookies on our website to give you the most relevant experience by remembering your preferences and repeat visits. By clicking “Accept All”, you consent to the use of ALL the cookies. However, you may visit "Cookie Settings" to provide a controlled consent.
Cookie SettingsAccept All
Manage consent