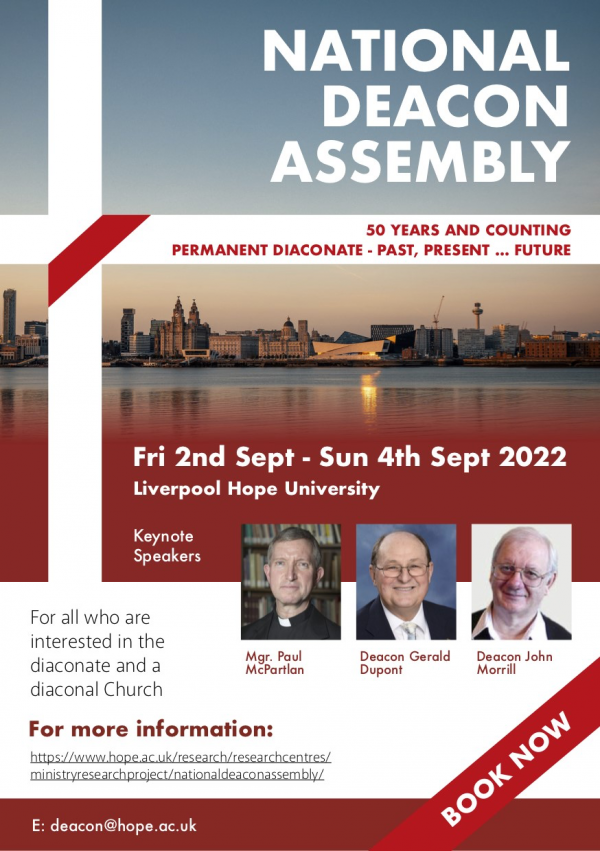 The theme for the 2022 National Deacon Assembly is ‘50 years and counting. Permanent Diaconate – past, present….future’. It marks the renewal of the permanent diaconate as an active, permanent order of ministry and looks forward in a changing world to how the diaconate will continue to be “a driving force for the Church’s service or diakonia toward the local Christian communities and a sign or sacrament of the Lord Christ Himself” (Paul VI, Apostolic Letter Ad Pascendum, Introduction).

The keynote speakers are:

One of the focus areas of the conference will be the “Ministry Research Project”. This project is based in the Archdiocese of Liverpool, England, and is delivered in partnership with Liverpool Hope University, Europe’s only ecumenical university foundation.
The overall aim of the Ministry Research Project is to improve the understanding and practice of diaconal ministry in changing times and to plan more effectively for the future.

In addition to the keynote sessions there will be eight workshops of which you will be able to attend two. There will also be discussion sessions and a chance for a Q&A with the speakers

The Assembly website is now fully up and running and you can book your places for this exciting event. The Assembly is open to Deacons, Diaconal aspirants, men in formation, wives, all clergy, in fact anyone who is interested in the Permanent Diaconate.