History and Architecture of the Cathedral

The idea of St Mary’s was actually conceived in 1838, by Fr James Worswick who had recognised the need for a second large church in the town to serve the rapidly increasing Catholic population of Newcastle. The industrial revolution and the desperate conditions in Ireland at that time, resulted in thousands of immigrant workers seeking better lives in this region and so it was to the enormous credit of those first building committee members, that the project was embarked upon with no initial finance, but with considerable determination and faith.

It was designed and built by one of the greatest of all Victorian architects, Augustus Welby Northmore Pugin, who was a convert to Catholicism and is now most famous for his major contribution to the neo-Gothic decoration of the Houses of Parliament. In 1844 and paid for in the most part with ‘the pennies of the poor’, St Mary’s Catholic Church was opened.

In those early times, day to day life for St Mary’s congregation was extremely harsh and frequent outbreaks of typhus hit this poor community. Indeed Bishop William Riddell, the first administrator, sadly died from typhus only three years after the church had been opened. His death was a direct consequence of his daily visits to the fever hospital and as such, he became a true martyr to charity. His mausoleum is in the Cathedral garden and the crypt, in which his remains are housed, lies beneath.

In 1850, six years after the opening, its status was elevated to Cathedral and St Mary’s became the mother church of the Diocese of Hexham (later to be renamed Hexham and Newcastle).

Thanks largely to a bequest in 1870, the tower and steeple could finally be added to complete Pugin’s vision and Dunn and Hansom were the chosen architects who were responsible for the design and construction in 1872. With its fine needle spire, standing 222 feet high St Mary’s silhouette has become a familiar and well–loved landmark on the skyline; for many years it was the tallest building in the city. Interestingly, until the 1880’s and despite being Roman Catholic, it was the first and only Cathedral in Newcastle.

During its lifetime, the Cathedral has welcomed many distinguished persons. In 2002, Her Majesty Queen Elizabeth II unveiled the statue of Cardinal Basil Hume, a son of Newcastle, and a year later, it played host to the President of Ireland.

Since the millennium, the Cathedral has seen many cosmetic changes; thanks to the generosity of sponsors there is a wonderful new organ and gallery, a completely re–tiled floor and five new beautiful stained glass windows. Additional there are the Pauline Book Shop and Cloister Cafe on site.

The building is especially notable for its:

St Mary’s is now a Grade I listed building.

The Cathedral precinct comprises the clergy house, a public garden (dedicated to the memory of one of Tyneside’s greatest sons, Cardinal Basil Hume), and the cloister with the adjacent Cloister Café and Pauline Books & Media.

The Cathedral is open every day, entry is free and non–commercial photography is permitted. There is some limited free parking for visitors. 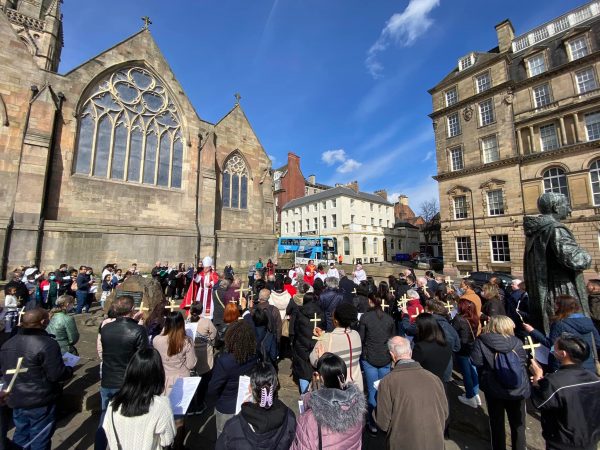 175th Anniversary of the Cathedral Church of St. Mary

Bishop Robert has appointed the following Priests of the Diocese as Canons of the Cathedral Chapter: